A single sub-anesthetic dose of ketamine, an NMDA receptor (NMDAR) antagonist, produces rapid and sustained antidepressant actions in depressed patients, addressing a major unmet need for the treatment of mood disorders. Ketamine produces a rapid increase in extracellular glutamate and synaptic formation in the prefrontal cortex, but the initial cellular trigger that initiates these and its behavioral actions has not been identified. To address this question, we used a combination of viral shRNA and conditional mutation to produce cell specific knockdown or deletion of a key NMDAR subunit, GluN2B, implicated in the actions of ketamine. The results demonstrate that the antidepressant actions of ketamine were blocked by GluN2B-NMDAR knockdown on GABA (Gad1) interneurons, as well as subtypes expressing somatostatin (Sst), or parvalbumin (Pvalb), but not glutamate principle neurons in the mPFC. Further analysis of GABA subtypes showed that cell specific knockdown or deletion of GluN2B in Sst interneurons blocked or occluded the antidepressant actions of ketamine and revealed sex-specific differences that are associated with excitatory postsynaptic currents on mPFC principle neurons. These findings demonstrate that GluN2B-NMDARs on GABA interneurons are the initial cellular trigger for the rapid antidepressant actions of ketamine and show sex-specific adaptive mechanisms to GluN2B modulation. 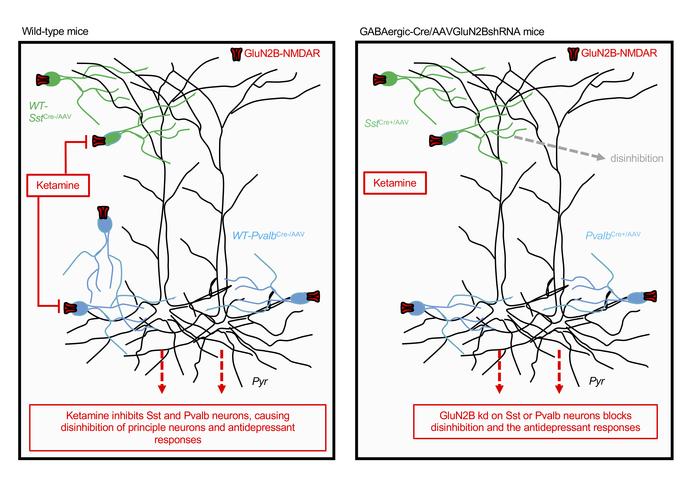